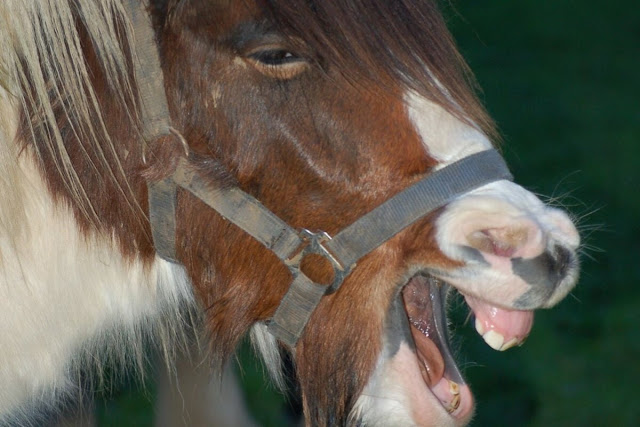 Last week we featured Serguro and Luca rescued by SAFE - Saving Abandoned fly grazing Equines as our Ponyhour rescue Ponies of The Week and now we've just heard that SAFE is desperately trying to raise enough funds so that they can offer their last remaining space to a filly cob dumped on the road in Basingstoke.

Here's what has happened as told by SAFE - Saving Abandoned Fly Grazing Equines please read and help if you can:


"This morning a young filly cob was dumped onto a road in Basingstoke from a transit van. A kind family saw it happen and as the pony was in a dangerous situation, they walked her to their home and put her in their back garden. They then called the Police who told them, as the pony is now secured, they have no responsibility for it.

They called the RSPCA and an officer visited them. As the pony was not in a dire state, the officer was unable to take it into their care.

The officer called all the horse charities she could think of, including us. We told her we were full, as did all the others. The pony is still in the back garden this evening.

We have rescued a huge amount of horses in the last three months and our outgoings far exceed our income. Our vet bills have been thousands of pounds due to positive Strangles results, high parasite burden in very poor horses and thirteen castrations of colts.

We do have one space but our current financial situation does not allow us to take in another horse.

This pony’s only option is help from all our supporters. If you are able to contribute to this pony’s rescue costs and care, we would fill our only space.

We have set up a Go Fund Me page (the photograph is not of the pony who needs our help). If you can contribute anything, it would certainly help us to help her.

Another alternative is considering setting up a standing order for a regular monthly donation to help us continue helping horses like this. http://www.safe-horses.co.uk/funding.html
We rely heavily on our supporters. This time we need your help once more. Thank you"
Ponyhour rescue pony of the week